Public musical performances have been a long tradition at Heart of England School; from our more formal concerts with a mix of classical and contemporary performances to full blown musicals like The Sound of Music.  Our students are always enthusiastic to show off their talent in the name of entertainment and experience.

“I’m always trying to think of new ways to give as many or our students as possible the chance to perform,” said Mrs Henton, Head of Music.  “We’ve had open air performances, musical Proms, musicals and even full-blown orchestras playing at Symphony Hall and at the Birmingham Conservatoire.”

The scope of performance occasions available to students is certainly wide and varied.  Particular highlights of the last few years have included our Diamond Jubilee Festival, live Armistice radio broadcast on our school radio and participation in the OSoSic orchestra events with performances at Symphony Hall, Warwick Arts Centre’s Butterworth Hall and at the Birmingham Conservatoire.

During March last year there was even an incredible performance with Armonico Consort and AC Academy at the Royal Albert Hall where our students joined a choir of 2000 young people. 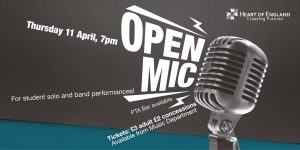 “Now, we’re trying a new format for performance called Open Mic Night.  It’s a chance for any students to come along and perform.  They can be soloists or duets, bands or ensembles – whatever combination they want!” said Mrs Henton.  “It’s on the 11 April and starts at 7pm.  It’ll be exciting so come along and see what a lot of talent we have at Heart of England.”

Some of our music events: